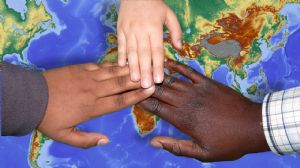 Thanks to a trust fund which derive from generous Victorian benefactors, after meeting our own needs we are also able to make significant charitable donations as an integral and fortunate part of our ministry.

The fund is a so called “permanent endowment” which means that we receive its income but do not draw on its capital and also have to have regard to maintaining over time its real value after inflation. The managing trustees of the fund are the Elders of the church , advised by an investment committee; the investments themselves are held by the custodian trustee, the URC South West Synod.

Our grants firstly help the URC nationally to pay for our ministers (about40% of the total) and are sometimes to sister churches with capital projects, but to a great degree they also fund Highworth projects and local and national charities.

“Christians Against Poverty” (CAP) has a major impact locally in helping people out of debt. It is a cooperative Highworth project among the local churches with its professional team supported by many volunteers and is often mentioned in Link. We are the principal financial providers, without which this valuable work could not continue on its present scale. We also offer major support to sustain the much-appreciated Lighthouse Bookshop. We support the dedicated work of Gloucester House and also church youth work in the town and in Swindon. We backed the opening of the Heritage Centre and support the Prospect Hospice.

A range of smaller grants (about 25 a year) are given to Swindon charities  - such as of  recent concern the hard-pressed food bank and the women's refuge - helping people in various forms of need, and to national charities.  Frequently, we are able to respond to major national appeals, such as the recent cry from the Disasters Emergency Committee to fight famine in Afghanistan and now to ease the terrible suffering in Ukraine.

Since 2001 the total of all this giving to church and society amounts to a staggering £675,000, all of it acknowledged and appreciated and a real expression of our faith.