Rescued from the water

The book of Exodus has become one of the central references to the theology for all the people of God who have experienced troubles in life.   It tells people how God cares about them and hears their suffering, and shows them that God "comes down" because of that suffering and walks with them guiding them; that there is hope, a new place of fullness of life.

And this is clearly seen in this such a well known story. So well know we can often lose the sense of drama that unfolds. The Israelites suffer terrible oppression at the hands of the Egyptians, which only gets worse as we read on.  The good relationship that we heard about with Joseph has long gone,  a new Pharaoh knows nothing about all that past, and cares only about the future and his legacy and to achieve his aims: the building of big cities.   He creates among his own people fear of all these foreigners in the land: "they will become more numerous and powerful than us - they will join our enemies against us.  We have to put a stop to this"  And so he enslaves the Israelites with even more forced labour.   This doesn’t stop the Israelites,  so Pharaoh issues a decree - make life even more difficult for them, and tells the midwives "any baby boy that is born should be killed".

Babies are born, but the midwives feared God and did not do what Pharaoh had ordered (civil disobedience).  And when they have to respond for their actions they just say "the Israelite women are vigorous and don’t turn to us for help".   And so Pharaoh extends his order now not to midwives, but to all people: "throw any Hebrew baby boy you find, into the Nile".   This is too close to comfort with so much that goes on in the world even today (we will come back to this in a moment).

We now read about the birth of Moses, which happens within this context. We will not know the name of his parents till we reach Exodus 6;20 (Amram is his father, Jockebed is Moses' mother,  she is also Amram's aunt).  We know that Moses is the youngest of three: Aaron and Myriam.  And instead of Moses being thrown into the Nile to die,  Moses is placed in a basket in a special place of the Nile, and his sister keeps watch. 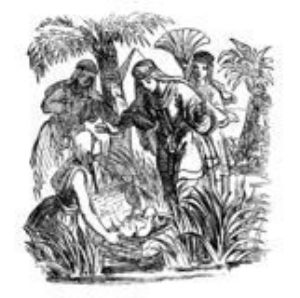 What follows is very interesting - Pharaoh's daughter comes to the river to bathe, hears a cry (this is the only time in the whole Bible that we hear of a child crying); she sees the basket and rescues it.   This princess takes pity on the child and recognizes he is a Hebrew child, and even knowing this is against her father's command, she takes him in and agrees that he will be raised as a royal child and when the child reaches a certain age he will be taken to palace to her.  And then the princess gives hima name: Moses (=Moshen -because he was taken out of the water).

Have you noticed that in the story so far, it is the women who play the most important part? they are the only ones we see, and that they are the ones running serious risks of their lives, because all this scene we have witnessed is contrary to the royal commands, in every detail. It is also the story that connects Moses' childhood with his later mission as leader of the people of God, in which "water" is crucial, be it the Red Sea, be it the rock in the desert. Moses is a visible sign that what would have been death really is about life.   It is also important for us to become aware that Moses is not only central to Judaism, but also to Christianity, to Islam, to the Baha'i faith.   Not only the giver of freedom but also giver of the law direct from God.  We will read how his brother will play a large role in this history, and we have seen and will read again of the role of his sister.

Let us return to the reading…we realize the despair of this family, mother and sister working together to save the child who would otherwise be killed in the waters of the Nile.   We cannot even come to imagine the tragedy of all those other families whose son was killed by those who follow the orders of Pharaoh. We can't even imagine the horror of such situation. And this is when a reading referring to event so ancient, becomes so current.

Imagine the horrors of those families who flee their war torn countries, or the destructive orders of their leaders, and feel it is less dangerous to embark crossing water than it is to stay in their country; the extremes they will go to and try to seek safety.   I cannot read about one without thinking of the other.   Sadly, there are too few Moses (=taken out of the water) in the world today. 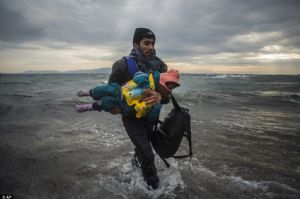 I remember the shock of the death of Alan Kurdi, the 3 year old Syrian boy; a scene that horrified the world.   And once again we read of so many crossing dangerous waters in search of life.  I am sure Moses' mother and sister could have identified with that pain.   I believe that when we connect the dots between the reading and our time, we too should realize that there are matters, like these, which are un-acceptable both to humans and to God.

As the hymn says: "In His hands He gently bears us,  rescues us from all our foes..."